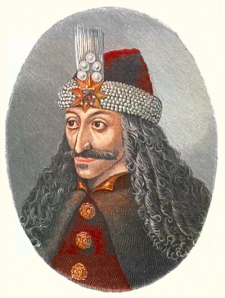 Vlad the Impaler, known as Dracula

If your father told you Dracula stories when you were young it might set your life on an unusual path.

Elizabeth Kostova’s introductory novel, The Historians, is based on Dracula stories heard in her youth and on her meticulous research on the 13th century despot Vlad Tepes, (Vlad III, Prince of Wallachia, known as Vlad the Impaler or Dracula).

The author had opportunity to hear the Dracula stories from her father and hear them again from Eastern Europeans because she went with her father when he took a teaching position in Ljubljana, Slovenia. She made notes and kept a journal.

All this and more is folded into Kostova’s exciting and readable novel about a secret society of historians that are sworn to seek out the immortal Vlad and destroy him before he destroys the world. This is a pretty tall order for a bunch of academics—Vlad the Impaler has earned his reputation for cruelty and will not hesitate to murder inquisitive historians when they bother him.

An unnamed adult narrates this tale of a time when she was a teen-aged adventurer looking for her missing father, one of the mysterious Historians. The diary of her father provides clues for her quest, and discloses the incredible story of the Historians as they seek Vlad the Impaler. This diary is recovered by the girl and kept by her into adulthood to form part of the narration. A young Oxford student, Barley joins the teen-ager and adds a bit of romance. Barly aids in the search and together they make a stunning pair of brainy detectives.

Along the way we are taken on a tour of Europe and visit the homeland of Vlad, which is behind the iron curtain, before the climax takes place in Turkey. The travel to exotic sites makes the book doubly worth reading, but beware of vampires; they may appear without warning and they can be lethal.

This novel is a new take on Dracula stories; I look forward to seeing the movie version, which I expect will have some very gory animations. I read it on my iPod using the Kindle app.

Retired software engineer who grew up in Montana, went to Montana State College in Bozeman, and moved to California to work at Stanford Research Institute (SRI). Carto's Library is about books I've read and liked; Carto's Logbook is about photography, travel and adventure. Mt. Maurice Times is tall tales mostly biographical.
View all posts by carto →
This entry was posted in eBook, Fantasy/Adventure, History, Mystery and tagged postaday2011. Bookmark the permalink.