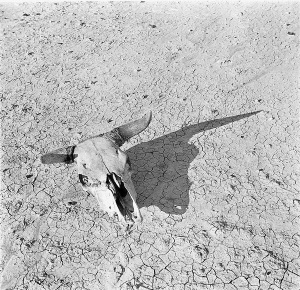 The dry sun-baked earth of the South Dakota Badlands.

This photo of a bleached skull was taken in May 1936 by Arthur Rothstein and appears in Mary Murphy’s history Hope in Hard Times, New Deal Photographs of Montana, 1936-1942.

Today, the Great Depression of the 30s is far in the past. Our own depression that started with a bank lending crisis is also fading; the government measures of employment show that employment is  now on the rise after sinking abruptly to the lows of the last few years. With our concerns of a greater depression now receding, it is a good time to reflect on the Great Depression and to think about how people managed their way through those difficult times.

This photo and [photographer] Rothstein’s caption, “bleached skull of a steer on the dry sun-baked earth of the South Dakota Badlands,” caused an uproar when it was [originally] published because Dakotans believed it was a false and exaggerated portrait of lifeless, dried-out plains.

The photo was not exaggerated; the drought was a fact and soon after taking this photo, Rothstein crossed the border into eastern Montana where he found the drought to be even more devastating that in South Dakota.

Because I grew up in Montana, Mary Murphy’s illustrated history was a logical way for me to reencounter my roots, so to speak, and learn a little about the Great Depression and the New Deal. The first thing I learned is that long before the depression started in 1929-30 a drought had been scorching the largely agricultural eastern counties of Montana.

Because of the drought,  the lack of water for crops and livestock was severe, causing crop failure and dying animals. It was hard times and money was scarce and many farmers took city jobs to survive.  When the bottom dropped out of the job market farmers couldn’t pay their bank loans on their farms and mortgage defaults followed.  The economy of Montana cycled into deep trouble.

By 1942 Montana had eased its way out of the depths of depression because of Roosevelt’s New Deal. Perhaps no state was helped by the New Deal more than Montana. There were three great hydroelectric dams built in Montana and many smaller projects involving roadwork and public parks. The great Fort Peck Dam project in eastern Montana provided employment for many of the former agriculture workers. Roosevelt and the New Deal were very popular in Montana.

Rothstein and three other depression era photographers were sent to Montana by the government to photograph the good effects of the WPA projects. The other three photographers were Marion Post Wolcott, Russell Lee and John Vachon. Murphy has included selections from the work all four in her profusely illustrated history.

The photographers, all of whom worked for the historical section of the Farm Security Administration (FSA), were told to observe and record the lives of ordinary people. Thus, their work became a pictorial history of the times.

Mary Murphy has written a very readable history of photographers as they worked in Montana. It is dedicated: “With deepest respect for those who navigated the Great Depression”. It wasn’t clear to me whether by this she meant the just the photographers or also the “ordinary people” whose lives were so altered by the economic disaster, but both deserve acknowledgement.

Murphy’s book is an informative and beautifully illustrated account of a hard times we hope are gone forever. In the words of the publisher:

Murphy’s concise summary of the New Deal years in Montana will become the standard account. She balances her narrative between eastern and western Montana and gives significant attention to the state’s rural communities, which had been depressed since the homesteading bust of the 1920s. Throughout her account, Murphy intersperses photographs of people, places, and landscapes, giving invaluable visual documentation to her narrative.

Good reading and the photographs are amazing.

Retired software engineer who grew up in Montana, went to Montana State College in Bozeman, and moved to California to work at Stanford Research Institute (SRI). Carto's Library is about books I've read and liked; Carto's Logbook is about photography, travel and adventure. Mt. Maurice Times is tall tales mostly biographical.
View all posts by carto →
This entry was posted in Non-fiction and tagged postaday2011. Bookmark the permalink.

1 Response to Looking at Hard Times