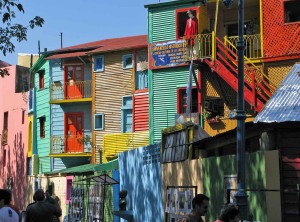 Mareco’s life is a disaster; he can’t sleep at night so he drives a cooperativa (taxi) until dawn—not the safest job for an inept and clueless 56-year-old. There’s more, his family life is a shambles: he is separated from his wife, his youngest son wants to quit school, and his oldest son has decided to come out as gay and is marrying a shoemaker.

As the dark crime novel Sueños de Perros by Guillermo Orsi opens, a new problem is about to descend over Mareco. He sits in his cramped San Telmo apartment relaxing with a few whiskeys in the morning after a night of taxi driving. A news headline flashes across the screen of the TV announcing that a former Rugby star has been assassinated. His old friend Robirosa has been murdered. Mareco feels badly, friends are important in Argentina, even though he hasn’t seen Robirosa in years. Mareco decides to investigate the murder of El Chivo—that is Mareco’s biggest mistake in his long life of mistakes.

Mareco’s friend Robirosa, known to sports fans as El Chivo (the goat), had fallen on hard times and had just returned to Buenos Aires from Italy where he played professionally. He was shot dead by a transient in the flophouse where he lived. The report says that police have no leads to the murder. Mareco knows that the police, known locally as “the national disgrace” will not find the murderer. He thinks, perhaps the police were the murders.

Mareco begins his search for the truth with El Chivo’s wife and then turns to the young prostitute Gloria, la pecosa (freckles). Gloria’s gives him the personal diary of El Chivo, but then Mareco becomes the target of kidnappers and murderers. It turns out that others want that diary and they are willing to kill to get it. For help, Mareco turns to Gargano, a policeman he trusts, but are the police to be trusted?

Mareco only wants to see justice done for his friend El Chivo, but Mareco’s questions stir up old problems that others wish to keep hidden. Argentina seems to have many “old problems” that writers like to uncover. Even though the plot is hard to follow, I enjoyed reading this novel. It is loaded with local color and great descriptions of Buenos Aires ( San Telmo and la Boca) and Rio de Plata.

Welcome to the sordid, violent under world of Buenos Aires as imagined by Guillermo Orsi. This crime noir novel won the 2004 Umbrial Prize, which guaranteed its publishing in the USA. The novel is available now in Spanish on Amazon, but readers will have to wait for the English translation. The wait shouldn’t be long because Orsi continues to win important crime novel prizes. His 2nd novel, “Nobody Loves a Policeman”, has already been translated. And his 3rd, Ciudad Santa (Holy City) has won the 2010 Hemmett Prize, which usually leads to an English translation.

Read it in Spanish or wait for the English translation. I hope it comes soon, this author deserves a wider following. Remember, even a dog’s dreams (Sueños de Perros)
can come true.

Retired software engineer who grew up in Montana, went to Montana State College in Bozeman, and moved to California to work at Stanford Research Institute (SRI). Carto's Logbook is about photography, travel and adventure; Mt. Maurice Times is tall tales mostly biographical; Carto's Library is about books I've read and liked.
View all posts by carto →
This entry was posted in Crime novel, Mystery, Translation and tagged postaday2011. Bookmark the permalink.