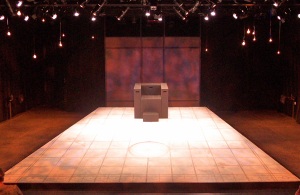 The lights dim in the tiny Nitery Theater on the campus of Stanford University and the packed house hushes. The lights come on again; dimly. Chorus appears at the edge of the empty stage and we hear Seneca’s lines of welcome:

Chorus turns and leaves as he came. Eerie sounds fill the theater and lights come up to reveal a large white nylon ground cloth that covers the still empty stage. From our right, a bearded, half-naked man wearing dark colored pantaloons enters the theatre—the man is Oedipus, King of Thebes.

We are watching Seneca’s Oedipus—the Roman version of the ancient Greek classic Oedipus, The King by Sophocles. This is the tragic story of an unwanted son purposely abandoned on a hillside to die of cold. But, the boy survives and he grows to manhood a prince in a Greek city-state near Thebes.

Oedipus leaves his home in search of adventure; along the way he kills an arrogant traveler in self-defense. Continuing on, Oedipus enters Thebes and becomes king when he outwits the Sphinx that had been holding the city hostage. Tragically, the Queen of Thebes, his new bride, is the mother who abandoned him to fate, many years before.

Mother and son, unaware of the incest, live together happily and prosperously for 15 years, but, as the play starts, a plague has struck Thebes and Oedipus is in torment because he can do nothing to alleviate the city’s suffering.

Oedipus walks onto stage and begins to wrap a corner of the glistening white cloth around his nakedness. As he pulls the cloth towards him, a body is revealed to the audience. Lying on the floor at the back of the stage is his queen. Jocasta rises, but does Odesius and Jocasta do not greet each other. They gather the flowing cloth in slow dance movements until they meet center stage to solemnly embrace.

Oedipus speaks for the first time:

This insufferable night is almost at its end.
The morning sun begins to show its hesitant face.
It drags itself out from behind some silent ominous cloud,
and stares unwillingly at the sick earth below,
bringing with it gloom instead of hope.
…

No comedy here; this is the stuff of tragedy.

Oedipus is a terrified, guilt-ridden king trying in vain to heal a country that is dying from the plague; he is obsessed by dark fears, distant and vague memories of events he cannot bring to mind … an ancient prophesy of doom, a death unavenged, the man he killed along the road to Thebes weighs on his subconscious.

As Oedipus reveals his psychological demons, and his wife Jocasta tries to comfort him:

Sweet husband, why do you wish to make your misery more wretched by lamentations?
…

The six members of Chorus enter to perform a savage dance of agony; they are the dying population of Thebes. The King is visibly moved, but helpless to relieve their plight.

“The figures in Seneca’s Oedipus are Greek only by convention: by nature they are more primitive than aboriginals.”

Ted Hughes translated the Seneca play using a word-for-word crib of the original Latin and an existing English translations. The script was written for the British National Theatre Company for production at the Old Vic Theater in London in 1968. Starring in that production were veteran classical actors Sir John Gielgud as Oedipus and Irene Worth (an American living in London) as Jocasta. Since that time, professional productions have been few and the work has gone out of print. In effect, the Stanford production is a revival.

The audience hears, in the Stanford production, not the classic British pronunciation, but modern vernacular. But, Hughes’ poetry does not come easily to young American voices. I miss the smoothed edges and open vowels of classical theater speech. There are compensations, however, the speeches in this production are well enunciated, spoken clearly and easy to understand. Moreover, the cast is full of spontaneity and energy that moves the play forward at a brisk pace; this is sometimes missing in performances of classical works.

The Chorus is ever-present; they dance, they chant, they become stagehands to move the simple stage settings about, and then they become actors—playing all the minor roles. Bravo!

Creative lighting and sound add value to this production from the dramatic opening to the final scene where the blind Oedipus stands witness to his mother’s suicide. Lighting, in particular, makes the simple staging seem richer. One beautiful and mysterious lighting effect illuminated a circle on the floor in mysterious colors that became a pool of blood while we listened to the blind Tiresias interpret the powerful words of his daughter Manto, who described in gruesome detail an animal sacrifice to the Gods.

The Stanford production continues until August 14. If you go, and you should go, be warned that Ted Hughes vision for this play is dark and violent. Evil is at work while the audience ponders with Oedipus the role fate plays in our lives. 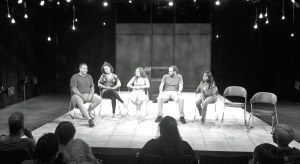 The cast, director at right, assembles for discussion with the audience.

I went to the Sunday afternoon performance and stayed to listen to the Q&A attended by Director, Lighting Designer and most of the cast.

What a good way to spend an afternoon and reflect on the torment of Oedipus; kings and leaders have problems, real and imagined, not known to those governed.

Retired software engineer who grew up in Montana, went to Montana State College in Bozeman, and moved to California to work at Stanford Research Institute (SRI). Carto's Logbook is about photography, travel and adventure; Mt. Maurice Times is tall tales mostly biographical; Carto's Library is about books I've read and liked.
View all posts by carto →
This entry was posted in Classics, Poetry, Theater and tagged postaweek2011, Review, Stanford. Bookmark the permalink.