Téa Obreht—Tigers, Myths and Death Rites In The Balkans 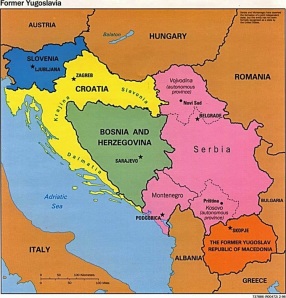 The Balkan States after the Yugoslavia break-up, 1992

In one of those insane acts that define modern war, NATO airplanes in 1999 (Operation Noble Anvil) bombed Belgrade and a random bomb destroyed part of the Belgrade Zoo. Prince, a Siberian tiger became so traumatized that he started eating his own legs and had to be euthanized. The tiger became a metaphor for the disintegrating Balkan states.

Téa Obreht’s novel The Tiger’s Wife, is set in an unnamed Balkan country that is emerging from a devastating ethnic war. Natalia, the narrator of this novel, is a 30-year-old native of The City (which could be Belgrade, but isn’t). She is a doctor, a graduate of the medical school in The City where her grandfather was once a distinguished professor. Like father, like daughter.

Oddly enough the Belgrade Zoo was bombed once before—on Easter Sunday in 1941. World War II arrived in Belgrade when Nazi airplanes rained bombs on the city and its newly dedicated zoo. A few of the exotic animals escaped from their broken cages to roam through the rubble of the destroyed city. It was reported that one of the escaped animals was a Siberian Tiger. 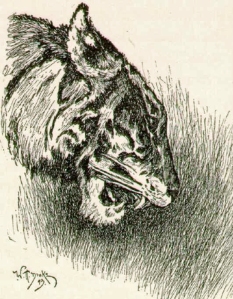 The Tiger Shere Kahn, The Jungle Book, Rudyard Kipling. Illustration by his father.

Natalia’s grandfather was born in 1932 in the remote village of Galina in the  mountains many miles to the NW of The City. He was still a child when a strange and unknown wild animal appeared in the hills near Galina. The etchings in the Jungle Book were used to identify the animal as a tiger, so it was called was called Shere Kahn, the name used by Kipling. Perhaps it was the very tiger escaped from the Belgrade Zoo, who’s to say.

As the story begins: Natalia’s gets a phone call from her grandmother Baco with the shocking news that her grandfather is dead. His body is now in The City, but he died far from home on a mysterious trip to a remote clinic in Zdrevkov on the other side of the southern border. “What was he doing there? Where are his things? His things did not come with the body. Where are they? Baco’s questions are like bullets from a machine gun.

Natalia is too grief struck to answer. All she can think of is her grandfather. She remembers the book he carried in his coat pocket, Kipling’s The Jungle Book. He loved that book, and he loved the tiger Shere Kahn:

“In my earliest memory, my grandfather is bald as a stone and he takes me to see the tigers . . . I am four years old.”

“My grandfather never refers to the tiger’s wife by name. His arm is around me and my feet are on the handrail, and my grandfather might say, ‘I once knew a girl who loved tigers so much she almost became one herself.’ Because I am little, and my love of tigers comes directly from him, I believe he is talking about me, offering me a fairy tale in which I can imagine myself—and will, for years and years.”
—pp. 3-4. The Tiger’s Wife.

Natalia cannot go home to share her grief with Baco because she and another doctor, Zorá, must deliver medicine and give inoculations at an orphanage in Brejevina, a coastal city across the border. She feels obligated to complete this act of coöperation because it was soldiers from her country who, in the recently ended war, orphaned the children.

As Natalia’s attention returns to her grandmother Baco, she promises her that she will call the clinic in Zdrevkov to arrange for the return of grandfather’s things and find out the exact day of his death. Baco must know the day because:

“The forty days of the soul begin on the morning after death. That first night, before its forty days begin, the soul lies still against sweated-on pillows and watches the living fold the hands and close the eyes, . . .The living know that, at daybreak, the soul will leave them and make its way to the places of its past . . . sometimes this journey will carry it so far for so long that it will forget to come back. For this reason, the living bring their own rituals to a standstill: to welcome the newly loosed spirit, the living will not clean, will not wash or tidy, will not remove the soul’s belongings for forty days . . .”
–p. 8

Some, including grandfather, call this belief in the “forty days” a superstition, but Baco is stubborn and Natalia knows better than to argue. Her thoughts turn back to her grandfather and the stories he told her:

Natalia will recall these stories and others to guide her grandfather’s wandering soul on its return home (and to come to terms with her own grief). Her narrative will lay bare the history of her grandfather’s life in Galina, where he was raised. In Galina, the tiger’s wife lived and died. Natalia retells grandfather’s story of the Tiger’s Wife, and perhaps, she adds some embellishments to make the story her own. 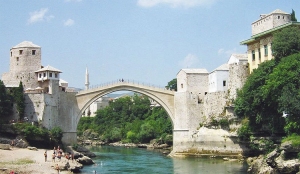 (Sarobor may be patterned after Stari Most (Old Bridge) in Mostal, Slovenia)

Travel with Natalia to Sarobor the birthplace of her grandmother, where on the eve of a dreadful bombing two men eat alone in an empty hotel dinning room overlooking the river and the old bridge that is doomed to be destroyed the next day. The two men are drawn to each other—one is the Deathless Man, the other is Natalia’s grandfather. What is the story here? Who is the Deathless Man?

As the novel progresses, Natalia visits the remote clinic where her grandfather died, but she must return to Brejevina where “the diggers” are searching for a body buried in haste without the proper rites. It is there that she discovers the secret of the Deathless Man and learns the truth of her grandfather.

Téa Obreht’s debut novel is an unforgettable trip through the war-torn states of the former Yugoslavia. She is a storyteller who has a gift that can make you believe in the impossible.

Included in the paperback edition of the novel is an interview by author Jennifer Egan (A Visit From The Goon Squad). Téa Obreht:

“Pretty early on in the writing I realized that mythmaking and storytelling are a way in which people deal with reality. They’re a coping mechanism. In Balkan culture, there’s almost knowledge that reality will eventually become myth.

In ten or twenty years you will be able to recount what happened today with more and more embellishments until you’ve completely altered that reality and funneled it into the world of myth.”
— Conversation Between Téa Obreht and Jennifer Egan

“Mythmaking and storytelling” those words must resonate with many authors and readers, but the storytelling, at times, seemed to ‘take over’ the novel and I became distracted. The excellent review of The Tiger’s Wife in the LA Times, seemed to share my opinion:

“Fiction is as much an art of omission as it is one of commission, and in “The Tiger’s Wife,” Obreht commits too much. She places stories in the foreground — of the deathless man, and of the tiger’s wife — that might have been better left in the background . . .”
—David Ulin, LA Times

This is a suburb first novel.

2 Responses to Téa Obreht—Tigers, Myths and Death Rites In The Balkans