The Robber Barons—High-speed Rail in California

Where are the poets when you need them? Won’t some poet sing the praises of this beautiful new train?

On July 7, 2012 the California Senate approved a bill authorizing construction of a 130-mile stretch of the high-speed rail down the middle of California’s Central Valley from a spot near the town of Madera to Bakersfield. Democrats are singing the praises of this railroad and Republicans are talking of its demerits. Perhaps, no one will sing of the railroad or the cities it connects.

California’s last great railroad project, the transcontinental railroad, was completed 125 years ago in the last quarter of the 19th century. It was the era of the Robber Barons, an age known for extravagance, the Gilded Age when the great capitalists and financiers developed (and exploited) the resources of the West. It was the time immediately after the Civil War. There was a mountain of copper in Montana and a great bonanza of gold in Nevada—the Robber Barons owned those riches or made money moving gold and copper over their railroads.

Listen to poet Walt Whitman sing in praise of the railroad:

“Thy train of cars behind, obedient, merrily-following,
Through gale or calm, now swift, now slack, yet steadily careering:
Type of the modern! emblem of motion and power!
pulse of the continent!”
—Walt Whitman (To a Locomotive in Winter, Two Rivulets, 1876).

The poem was included in Whitman’s Leaves of Grass in 1900.

The image of the cars “merrily-following” the engine as it crosses the continent still rings today. In fact, Composer Greg Bartholomew has set the poem to music for the Seattle Pro Musica. They first performed the poem in March of 2003, as part of their 30th Anniversary concert entitled “Best of the Northwest.” Bartholomew has posted on his website a video of The Pink Singers performance of To a Locomotive in Winter. The video was recorded on July 16, 2011, at the Bloomsbury Theatre in London.

Personally, I like trains; the old steam trains are the best. Growing up in Red Lodge, Montana, I remember the weekly noontime visit of the train to our little coal-mining town at the foot of the Beartooth Mountains. The last mine closed in 1945 after a terrible cave-in and then the mill burned to the ground leaving the grieving town without jobs or industry, but the RR continued the weekly run to deliver the Railway Express and an occasional boxcar of grapes ordered by the local Italians who made wine in their basements. 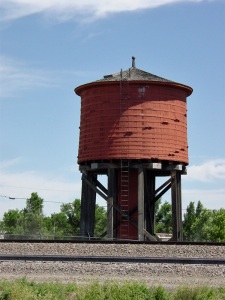 I remember the steam locomotives coming to the NP station off Main St. (before the railroad switched to diesel trains). The trains passed near where I lived. The red-painted wooden water tower was about 100 yards from my door. I could hear the release of steam as the air brakes brought the locomotive to a stop. The spigot arm was lowered with a creak onto the tender and the brakeman pulled a chain to open a valve to release the water and fill the tender for the return trip to Billings. The steam trains were replaced by diesel by the time I was in high school and some time later the water tower collapsed during a spring storm.

Now it is 2012 and California’s new railroad project will mean the end to diesel commuter trains that run on the Caltrain tracks just a block from my California home. The commuter trains will all be converted to electricity as part of the high-speed rail project. I have mixed feelings about the demise of the diesel commuters—the new trains will be quieter, but I suppose the train whistles will still be loud.

If the government gives California the promised $3.3 billion, then construction will begin soon on the roadbed for California’s high-speed railroad about 100 miles away in the Central Valley. A few years later, the 130 mile long Madera to Bakersfield “train to nowhere” will become a reality. Ironically, it is Democrats who support the railroad and Republicans who are adamant in opposition. The opposite was true in 1862 when President Lincoln signed the Pacific Railroad Act to create the first transcontinental railroad. Lincoln had strong support of his Republican colleagues and there was equally strong opposition by the Democrats.

Walt Whitman devoted a stanza to the Pacific Railroad in his long poem Passage to India.

I see over my own continent the Pacific Railroad, surmounting every barrier;
I see continual trains of cars winding along the Platte, carrying freight and passengers;
I hear the locomotives rushing and roaring, and the shrill steam-whistle,
I hear the echoes reverberate through the grandest scenery in the world;
I cross the Laramie plains—I note the rocks in grotesque shapes—the buttes;
I see the plentiful larkspur and wild onions—the barren, colorless, sage-deserts;
I see in glimpses afar, or towering immediately above me, the great mountains—I see the Wind River and the Wahsatch mountains;
I see the Monument mountain and the Eagle’s Nest—I pass the Promontory—I ascend the Nevadas;
I scan the noble Elk mountain, and wind around its base;
I see the Humboldt range—I thread the valley and cross the river,
I see the clear waters of Lake Tahoe—I see forests of majestic pines,
Or, crossing the great desert, the alkaline plains, I behold enchanting mirages of waters and meadows;
Marking through these, and after all, in duplicate slender lines,
Bridging the three or four thousand miles of land travel,
Tying the Eastern to the Western sea,
The road between Europe and Asia.

Whitman knew how to sing about unknown places.

The Last Spike, Thomas Hill, 1881. Promontory, Utah. Chinese workers of CPRR on left, Irish workers of UPRR on right and Leland Stanford in the center.

Chinese laborers from the CPRR laid one rail and Irish laborers from the UP laid the other. The construction managers slid a laurel wood tie in place and Leland Stanford drove a solid gold spike into a pre-drilled hole to finish the rail. The golden spike now resides at the Cantor Museum at Stanford University.

Matthew Josephson describes the funding and development of the Pacific Railroad in The Robber Barons. It is a classic story of greed and arrogance. The original edition was written during the Great Depression (1929-1933), which Josephson called the Great Slump. President Obama and others have called the current economic downturn, the Great Slump of 2012. The high-speed rail is part of the president’s recovery plan so I hope the $4.9 billion bond sale is a success and construction helps in California’s recovery.

Let’s call this poem a winner, and hope for the best.