Seeds of Evolution — Romantic or Scientific? 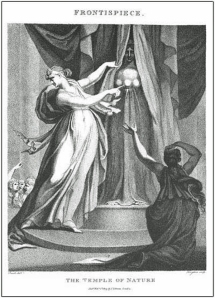 Free books, I like free books and what better place to pick one up than the University of Chicago Press. Just in time for Spring, the free book for April is An Orchard Invisible, which opens with this poem fragment titled “Evolution”:

Organic Life beneath the shoreless waves
Was born and nurs’d in Ocean’s pearly caves;
First forms minute, unseen by spheric glass,
Move on the mud, or pierce the watery mass;
These, as successive generations bloom,
New powers acquire, and larger limbs assume;
Whence countless groups of vegetation spring,
And breathing realms of fin, and feet, and wing.
— ERASMUS DARWIN, from The Temple of Nature, 1803, Canto I.V, Line 295

Erasmus Darwin was the grandfather of Charles Darwin who also had a bit to say about evolution.

But, the Chicago Press free book is about seeds: big seeds, little seeds, all kinds of seeds. Where would we be without seeds:

Come to think of it, Erasmus Darwin’s long poem is also available as a free download on the www. I found several versions; the most interesting and complete is on Romantic Circles, which is a refereed scholarly website devoted to the study of Romantic-period literature and culture. The RC version is annotated and includes images of the original engravings by Henry Fuseli. What a find!

The annotations for the first two lines of the fifth canto (as quoted by Silvertown above) follow:

V. ORGANIC LIFE beneath the shoreless waves
Was born and nurs’d in Ocean’s pearly caves;

“Beneath the shoreless waves”: The earth was originally covered with water, as appears from some of its highest mountains, consisting of shells cemented together by a solution of part of them, as the limestone rocks of the Alps; Ferber’s Travels. It must be therefore concluded, that animal life began beneath the sea.
Nor is this unanalogous to what still occurs, as all quadrupeds and mankind in their embryon state are aquatic animals; and thus may be said to resemble gnats and frogs. The fetus in the uterus has an organ called the placenta, the fine extremities of the vessels of which permeate the arteries of the uterus, and the blood of the fetus becomes thus oxygenated from the passing stream of the maternal arterial blood; exactly as is done by the gills of fish from the stream of water, which they occasion to pass through them. […]
— The Temple of Nature, Electronic Edition, In-line commentary, Romantic Circles, Ed. Martin Priestman.

This being National Poetry Month, let’s take a moment to applaud the efforts of Erasmus Darwin to present the story of evolution in poetry. Maybe the grandfather’s romantic observations could supplement the detailed scientific work in Charles Darwin’s On the Origin of Species to make it more palatable and understandable to non-scientists.

To poets everywhere, past and present, and don’t forget how important seeds are, too.